TOUR OF THE ISLAND OF ISCHIA 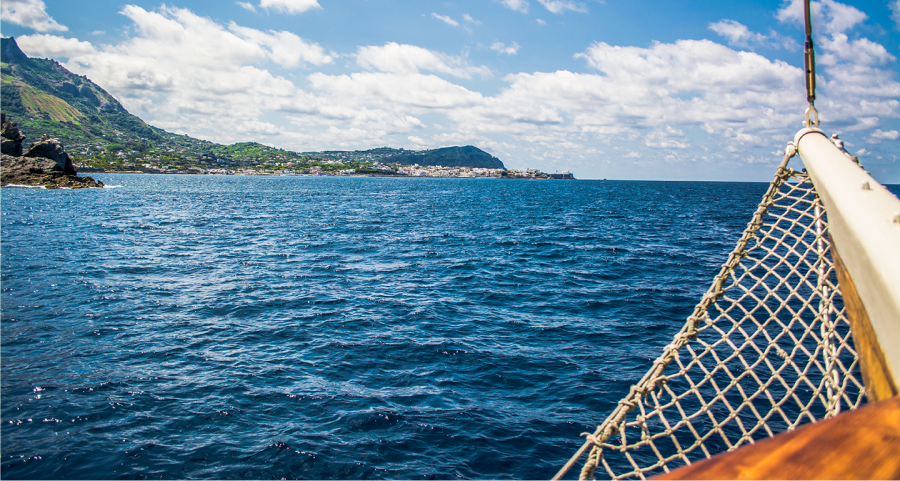 We offer you an exclusive, spectacular tour of our isolaverde, all by sea, aboard our stupendous gozzi, the typical wooden fishing boats characteristic of the southern Italian tradition. On board we will touch the most suggestive places, the uncontaminated ravines with crystal clear water, the bays with breathtaking views. Unforgettable places, which have made the history of our island and painted with indelible brushstrokes the evocative natural beauty of our coasts, such as the Spiaggia degli Inglesi, the marvelous Village of Ischia Ponte that unfolds among the alleys and fishermen's huts, a jewel of architecture Mediterranean, dominated by the gigantic Aragonese Castle, hub of the history of the island and today a world famous museum. And again the beach of Cartaromana with the famous Scogli di Sant’Anna and the Torre di Guevara, where the great Michelangelo is said to have stayed. Leaving Ischia and past the delightful coastline of Casamicciola, you reach the Fungo di Lacco Ameno, and then the hill of Montevico, the original nucleus of Pitechusa, the bay of S. Montano and the promontory of Zaro, beyond which you can see the wonderful beaches of S.Francesco and della Chiaia. Forio is the largest municipality on the island and the richest in terms of landscape and environmental beauty: from the sea you can already admire the dome of S.Gaetano, the bastions of the Torrione, to defend the ancient Saracen invasions , and the Church of Soccorso overlooking the sea. Further along the coast is the Villa Colombaia, which belonged to the master filmmaker Luchino Visconti, and the La Mortella Gardens, created by Lady Susana Walton, wife of the great composer Sir William, immersed in the luxuriant nature of the Zaro wood. On the opposite side the Scogli Innamorati, the Cava beaches of Isola and Citara up to Giardini Poseidon, among the largest and most famous thermal parks in Europe. Immediately after we will pass with our gozzi Punta Imperatore, the hill that overlooks the bay of Citara, and we will find ourselves in front of "la Nave", a powerful rocky conformation of tuff stone, known by that name since according to legend it was the galley of Alcinous, king of the Phaecians, made available to Ulysses to accompany him on his journey back to Ithaca. Immediately after the three suggestive inlets of Scannella, Polara and Sorgeto: three of the most beautiful places on the island thanks to the conformation of the bays, untouched nature and crystal clear water. The Bay of Sorgeto is the most famous for its natural sulphurous water pools which, mixed with sea water, create the ideal conditions for balneotherapy so that it is possible to swim all year round. After a few minutes of navigation we arrive in the small port of Sant'Angelo, probably the most suggestive seaside village on the island, born from an ancient fishing village, dominated by the huge rock called La Torre, a small tufaceous islet that dominates and protects the little square of the village, where you can stop for a coffee or stroll, browsing through the little shops selling local products and boutiques. After this stop we will leave again to the discovery of the south-eastern slope that begins with the most extended beach of the whole island: the Maronti (almost 3 km). After passing the coast, we will sail along the Sgarrupata and Punta San Pancrazio, two delightful bays with a wild and primitive appearance given their volcanic nature, which can only be accessed by sea, but which reserve succulent surprises given the presence of small restaurants that cook delicious typical products . After them we reach another stage of great visual fascination: the Grotta del Mago, a cove shrouded in mystery, for some scholars an ancient pagan temple then reached by the sea, for others nothing but a natural sculpture due to the erosive action of sea water.

TOUR OF THE ISLAND OF CAPRI 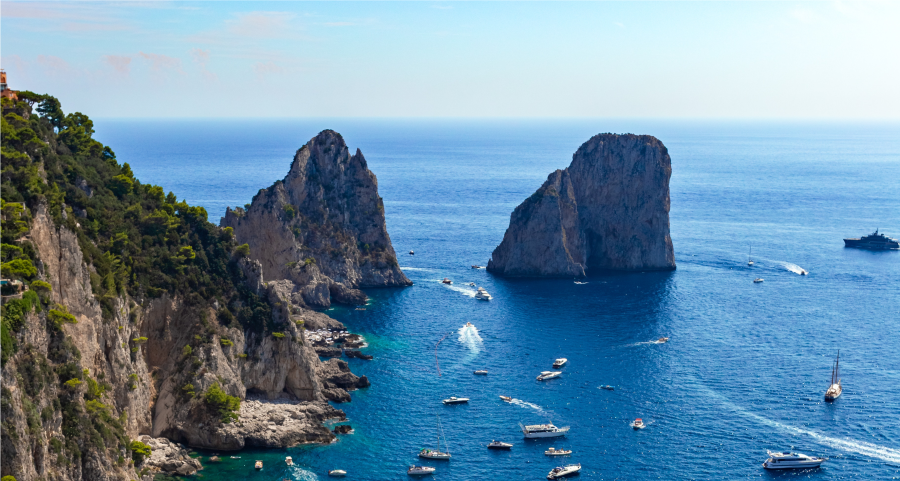 always with our characteristic and safe boats, we offer a visit and tour of the island of Capri. The excursion to the Blue Island will be enriched by a nice and cheerful stop on the ground to go shopping, as well as some breathtaking stops in the bays and the most suggestive ravines for swimming in the crystal clear water of the island. Even just sailing around Capri, you will remain amazed: its jagged coasts seem to be carved by an artist's hand, so rich in caves and inlets. Do not miss the stage at the Blue Grotto: a natural cavity about 60 meters long and about 25 wide, so named for the magical color that is given inside by the sunlight that enters through an underwater window that opens exactly under the opening entrance, where the light is filtered by the water that absorbs the red and lets the blue pass. In Roman times a real time, even statues were found in it, while for many years it was even abandoned because legend told that it was a place haunted by spirits. The entrance is two meters wide and only one high. The cave can be visited from inside on small boats. Immediately after an obligatory stop at the symbol of the island: if you think of Capri, the first image that comes to mind are the Faraglioni, three rock peaks that rise from the sea a few meters from the coast. They even have a name: the first joined to the earth is Stella, the second, separated from the first by the sea, is Faraglione di Mezzo and the third Faraglione di Fuori or Scopolo which means promontory on the sea. Other stages of great environmental, landscape and cultural interest are: Marina Grande and Marina Piccola, the Scugnizzo Statue, the Grotta del Corallo, the White Grotto and the Green Grotto, the Natural Arch, Villa Malaparte, the Punta lighthouse Hull.


TOUR OF THE ISLAND OF PROCIDA 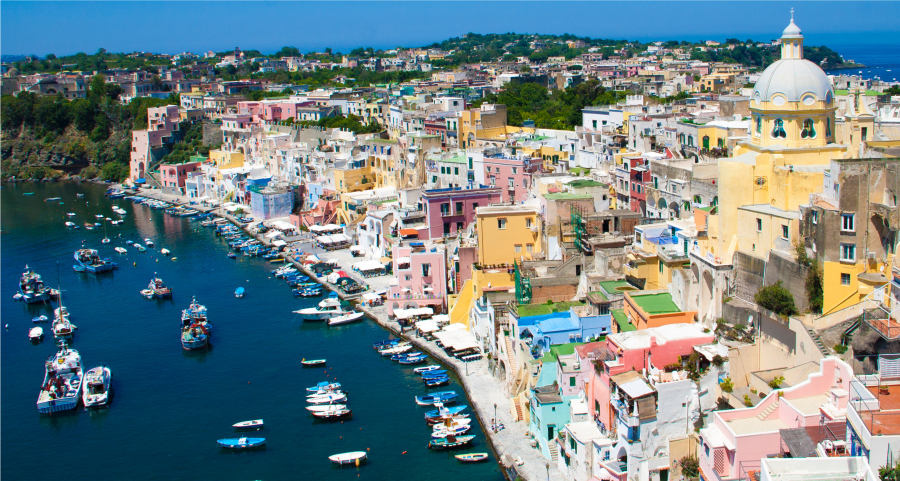 we propose the tour of the island by sea also of the small island of Procida, the smaller of those in the Gulf of Naples and also like the sisters of volcanic origin. The beauty and charm of Procida, its beaches, its ravines with jagged volcanic coasts allow to admire unique landscapes thanks to the fact that its uncontaminated places are all enclosed in a few square km, including the islet of Vivara, in front of which you can dive into the fresh waters and enjoy the many colors of vegetation that break on the sea. Furthermore, its profile, its alleys and its colors manage to give visitors the atmosphere of past centuries. The islet of Vivara was born forty thousand years ago from the eruption of a volcano, of which today only half of the lava basin remains and from the sea it already appears with the characteristic half-moon shape. This half-moon contains the spectacle of the nature of the Gulf of Genito, a mirror of crystalline sea in front of the Santa Margherita promontory. The island, given its origin, is a site of great archaeological and faunal interest, given also its botanical development characterized by the luxuriant Mediterranean vegetation that envelops it all and which changes in a spectacular way with the changing seasons. Immediately after we approach the magic of Marina di Corricella, a romantic place much loved by lovers because of its timeless atmosphere: in the shape of an amphitheater and surrounded by fishing boats and their nets laid to dry along the eighteenth century port, surrounded by its arches , from the windows of the fishermen's houses and all the now famous and dear images thanks to the masterpiece of M.Troisi “il Postino”, make it a real natural postcard in reality. Finally, a stop at the Chiaiolella, a bay with shallow waters and the many characteristic cafes that follow one another along its short and fascinating perimeter, make it one of the most coveted and popular places in Procida. La Chiaiolella, despite the summer crowd, remains a charming fishing village, dominated by the Sanctuary of San Giuseppe from the 1800s. The characteristic small port, like almost all the bays of Procida, is of volcanic origin, a now extinct crater. From it you can admire breathtaking sunsets. 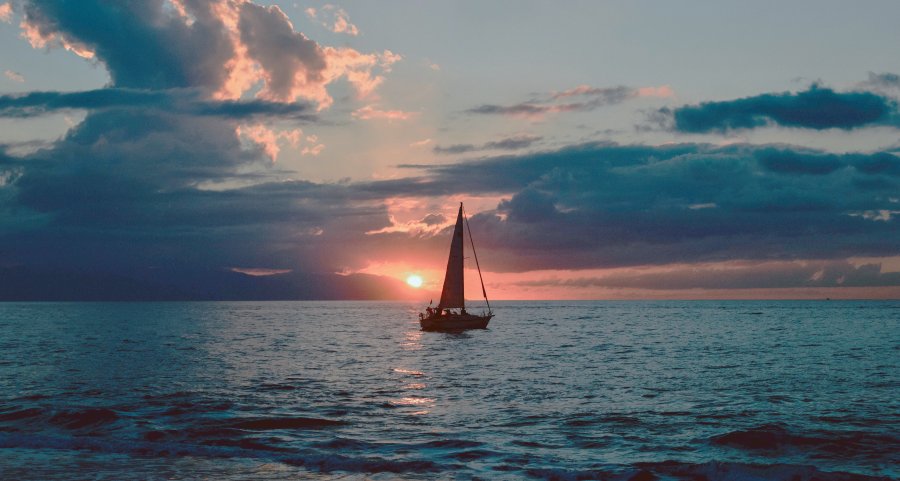 Unmissable excursion for a fabulous day that will remain in your soul and heart as an unforgettable moment of your holiday. On board our spectacular "Joya" schooner, an ancient sailing ship completely renovated as then but with all the comforts. Starting from the port of Forio, gently skirting beaches, bays and ravines, allowing you to relax in the sun and enjoy the pristine beauty of the Forio coast, we will finally stop in the Bay of Citara, offering you all the free time you need for a refreshing swim. sea in the beautiful waters of the bay and a rich and tasty aperitif, waiting for the magic of the sunset. 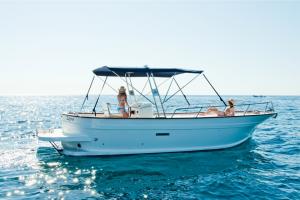 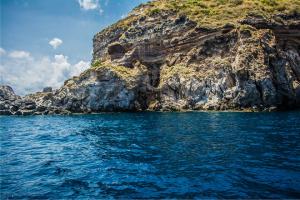 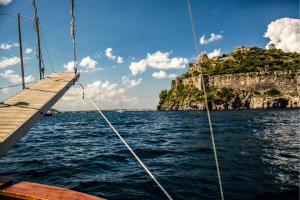 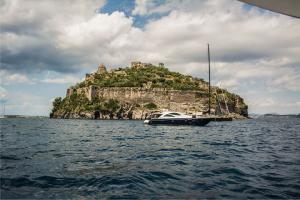 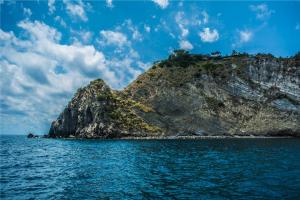 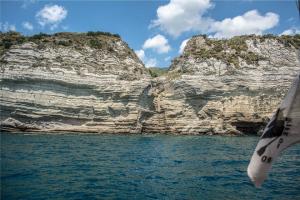 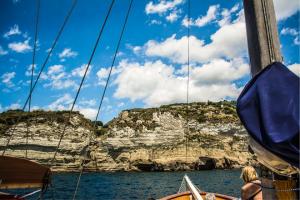 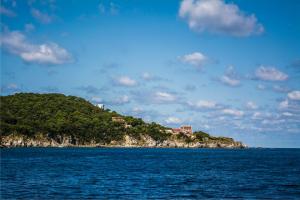